Tomislav Tomašević completed a BA and MA in Political Science at the University of Zagreb and MPhil in Environment, Society and Development at the University of Cambridge. His research interests are related to commons, transformation of public services, critical urban theory, environmental justice and social movements.

For the past 20 years he has been engaged in activism on issues of youth, environment and urban development. Tomislav was the president of Croatian Youth Network, president of Zelena akcija / Friends of the Earth Croatia and co-founder of Right to the City and Group 22. He was a member of several advisory bodies, including the Governmental Advisory Council for Youth and the Governmental Advisory Council for Sustainable Development and Environmental Protection. At the international level, he has been active in the global movement for environmental justice, participated at around 10 UN ministerial conferences on sustainable development and acted  as a honorary Youth Advisor at the global level to the UN Environment Programme.

He has received several awards and scholarships, including the Marshal Memorial Fellowship, Chevening Fellowship and Cambridge Overseas Trust Fellowship.

His publications reflect a diversity of formats including policy analysis, theoretical texts, scientific articles, empirical studies and educational manuals, as well as diversity of research areas, such as youth policy, environmental protection, sustainable development, governance of natural resources, etc. He has co-authored two UNDP Human Development Reports on youth issues and written several manuals and publications on youth policy. In the area of sustainability, he has written several publications on environmental law and renewable natural resources management, most recent of which is “Message in a Bottle: Analysis of Concessions Policy on Water Extraction for Bottling and Market Sale”.

He is currently conducting research on the theory of commons, democratisation of railway services, and models of participative governance of water services and waste management services. 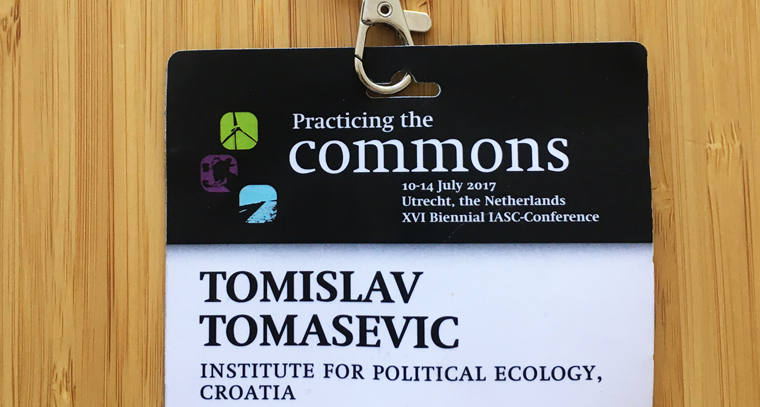 Tomislav Tomašević at the IASC 2017 Conference